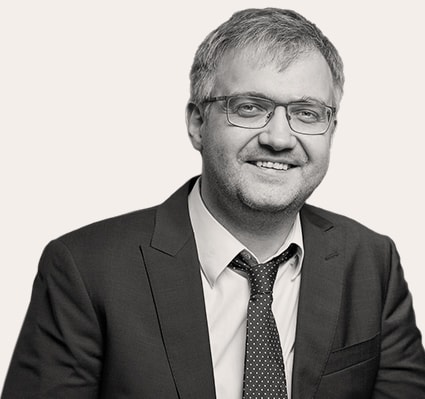 He has over 20years of experience in client interests’ representation in courts. He specialises in resolving disputes related to corporate, antitrust, labour and commercial law, as well as disputes with public authorities.

Participated in International Commercial Arbitration as an arbitrator. In 2021, he was included in the Guide to Next Generation of Russian Arbitrators.

Alexander is currently an Associate Professor at Moscow State Law University and has over 20 years of teaching experience. Since 2018 he has been the Chairholder of Practical Jurisprudence opened with his support.

According to such leading international and Russian rankings as The Legal 500 EMEA, Chambers Europe, IFLR1000 and Pravo.Ru-300, FBK Legal’s Corporate Law Practice supervised by Alexander is one of the best in Russia. The rankings recommend Alexander as "a gifted lawyer" and note that "he’s very good at solving problems, and he thinks outside the box".

The international legal rating Chambers Europe 2021 named Alexander among the best lawyer in Corporate Law / M&A and Dispute Resolution; in dispute resolution, he was also recommended by Chambers Global 2017.

The Best Lawyers 2022 recommends Alexander Ermolenko among the best lawyers in Russia in Litigation, Corporate law, Antitrust law and Law on insolvency and reorganization.

In the Pravo.ru-300 2020 rating, Alexander was called one of the best Russian lawyers in the practices of Corporate / M&A, Private Wealth Management, and Family and Inheritance Law.

The rating of the “Kommersant” publishing house in 2017 ranked Alexander Ermolenko among the leading lawyers in the field of M&A, commercial dispute resolution and real estate.

Alexander participated in the working groups of numerous legislative initiatives, including TACIS Insolvency II (developing bankruptcy regulations), Budget Accounting, Reporting and Auditing (analysing the budget legislation of federal subjects of the Russian Federation for compliance with the federal budget legislation), the Law on Consolidated Accounts, and the concept for implementing IFRS in the legal system of the Russian Federation.