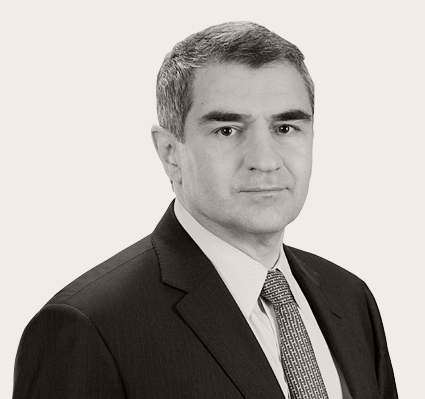 Levon Grigorian
Counsel, PhD in Law, LL.M.
Levon.Grigorian@fbk.ru
Team
Levon Grigorian serves as counsel at FBK Legal. He has the status of advocate under Russian law and is licensed to practice law in the State of Texas, Unites States.

He specializes in the resolution of commercial and investment disputes, international arbitration, economic sanctions, government and corporate investigations, assessment of legal risks and criminal aspects of international investments and commercial projects. His experience also includes advising clients on cross-border investments in such sectors as natural resources, real estate, telecommunications and marine transportation with the focus on Russia and other countries of the former Soviet Union.

Over the last 25 years, Levon Grigorian has advised large Russian and foreign public and private corporations and governments and worked on international corporate, oil and gas, mining, privatization and other projects.

He advises clients on matters of international trade and government policy, including sanctions and export control programs and laws of the US, the EU and other countries, application of US Foreign Corrupt Practices Act and UK Bribery Act.

Apart from his work in Russia, he has over 15 years of experience of practicing law in the US and other countries at Akin Gump Strauss Hauer & Feld LLP, King & Spalding LLP and Mayer Brown LLP.

Prior to starting private practice, he was a law professor at the Kutafin Moscow State Law University.

Levon Grigorian has participated in the drafting of several laws in Russia and abroad. He has authored a number of articles and presentations on various legal and business subjects in Russia, the US and other countries.

Levon Grigorian’s projects and cases include:

Chamber of Advocates of the Moscow Region