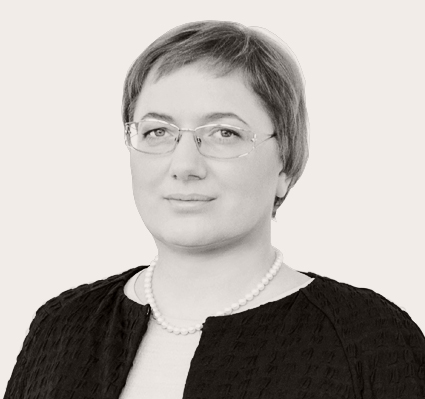 Nadezhda has specialised in commercial, financial, and tax law since 1993 and is an Attorney at Law at the Bar Association of Moscow.

Among her positive achievements are endorsements based on independent law firm rankings, such as The Legal 500 EMEA, Chambers Europe, Chambers Global, IFLR1000, Pravo.Ru-300 and others, which recommend FBK Legal as one of the best law firms in Russia, an achievement in which Nadezhda Orlova has played an instrumental role. In 2013 and 2014 FBK Legal was nominated in the Best National Firm category for the Chambers Europe Awards for Excellence.

During her time at FBK, Nadezhda Orlova has taken part in key working groups and expert councils, including the Council of Experts under the State Duma Committee on Budget and Taxes, as well as in the World Bank and EBRD projects to improve Russia's tax legislation.

Responsible for legal matters in the working group arranged by the Ministry of Justice, Federal Chamber of Lawyers and Ministry of Finance of Russia to improve legislation that regulates the legal services market and unite all lawyers in a bar association.

Selected by the International Bar Association as Russia's National Reporter of the IBA Tax Committee for 2017 and 2018.

She contributed chapters to Tax Law, a seminal textbook on the subject, and is actively involved in educational programmes in tax and financial law.